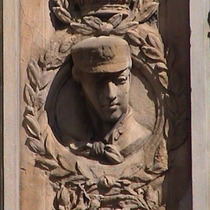 The west face is framed with pilasters each side, decorated with emblems of "war" to the left and "peace" to the right. Carved in the stone between the pilasters is a medallion portrait of Prince Albert Victor.

This section lists the subjects commemorated on the memorial on this page:
Temple Bar memorial - Prince Albert Victor

This section lists the other memorials at the same location as the memorial on this page:
Temple Bar memorial - Prince Albert Victor