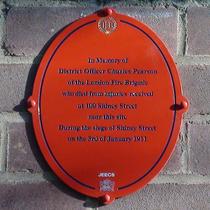 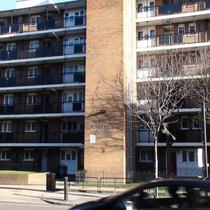 In memory of District Officer Charles Pearson of the London Fire Brigade who died from injuries received at 100 Sidney Street near this site during the siege of Sidney Street on the 3rd of January 1911.
{At the top is a monogrammed "LFB" inside a laurel wreath. At the bottom: "JEECS" with a small colourful something.}

Our colleague Alan Patient decoded JEECS into ‘Jewish East End Celebration Society’ and the colourful something is their logo, so they are now added to ‘Created by’.

This building, Wexford House, apparently stands on the site of 100 Sidney Street, where the gang holed up and which caught fire. It thus seems strange that the name 'Siege House' was not given to this block, but to the block of flats right down at the south-west end of Sidney Street.

This section lists the subjects commemorated on the memorial on this page:
Sidney Street siege and fire

We are indebted to Derek Smith for the following write-up of the siege: The S...

Died at the Siege of Sidney Street.  Andrew Behan has researched this man: D...

This section lists the subjects who helped to create/erect the memorial on this page:
Sidney Street siege and fire

From the picture source website: "Our aim is to raise awareness of the histor...