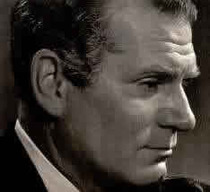 Born Dorking, Surrey, as Laurence Kerr Olivier. With his wife Vivien Leigh, he managed the St James's Theatre from 1950 to its closure in 1957. Founding Director of the National Theatre, 1963 - 1973. Baron Olivier of Brighton. The Olivier cigarette brand was a paid endorsement deal with Gallaghers (see also Du Maurier).

His filmed 'Henry V' of 1944 may be one of the best known Shakespearian roles. When the figure on Henry’s tomb in Westminster Abbey was renovated in 1971 the head and hands were replaced and tradition has it that the hands were modelled on Olivier’s.

This section lists the memorials where the subject on this page is commemorated:
Laurence Olivier, Baron Olivier