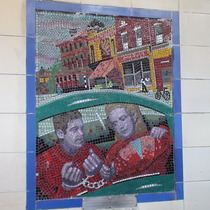 Handcuffed together, Robert Cummings as Barry Kane and Priscilla Lane as Patricia Martin escape from a gang of enemy saboteurs. In the background is the old Leytonstone High Road.

“The drama of a nation stirred to action, of a people’s growing realisation of themselves and their responsibilities” – Motion Picture Herald.

This section lists the subjects commemorated on the memorial on this page:
Hitchcock mosaics 10 - Saboteur, 1942

This section lists the other memorials at the same location as the memorial on this page:
Hitchcock mosaics 10 - Saboteur, 1942

The photograph on which the design of this mosaic is based is analysed in det...