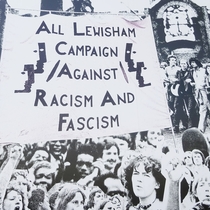 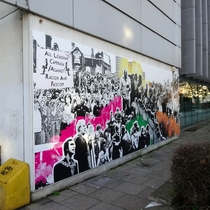 All Lewisham campaign against racism and fascism.

Gold has "The mural was created through a collaboration between local community groups and graphic designer Ted Low, a Goldsmiths graduate, and is formed from a collage of images by five photographers who captured the events of 13 August 1977."

The colour in the artwork refers to 1970s reggae and anti-fascist punk culture, as well as smoke bombs used during protests.

The events shown in the mural took place on the streets around this college. Originally the mural was to be installed in the park on Batavia Road, off Clifton Rise, close to where the anti-fascists first congregated.

There are three information panels in front of the mural, describing the battle, the creation of the artwork and some of the groups and people featured in it including Godsiff, Howe and Stockwood.

This section lists the subjects commemorated on the memorial on this page:
Battle of Lewisham - mural

Politician. He worked as a bank clerk before joining the Labour Party. Served...

This section lists the subjects who helped to create/erect the memorial on this page:
Battle of Lewisham - mural