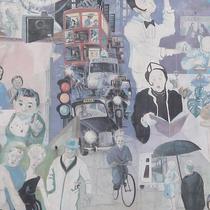 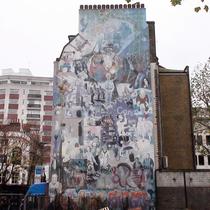 {In the bottom left corner a waiter holds out a menu on which is written:}
Menu
Fitzrovia Mural, commissioned by Camden Council for the Fitzrovia community. Copyright 1980. Painted Art Works Co-op, Simon Barber, Mike Jones. Tel: 485 ???}

A montage of scenes, all relevant to the area at the time: construction activities, the Post Office tower, an angry cat, a TV screen advertising death-bringing cigarettes, footballers, some people around a table who are ironing, reading a newspaper entitled Tower, reading a book and looking at a crystal ball, Horace Cutler (then leader of the GLC) as a Dracula-like creature pointing at Council Hall plans for sky-scrapers, a window-cleaner, office workers using computer-like machines to churn out bills, a clockwork architect on roller-skates at a drawing board (we can't explain but it must be an interesting story), an innocent-looking boy, a tailor, a disk jockey, a man in a fur coat reaching for a stack of bank notes with dice and cards nearby, various men and women in non-European clothes, such as saris, some people in a pub, a man mixing a cocktail, people in a restaurant, nurses, one of whom is holding an umbrella over a pregnant woman getting into an ambulance, and the central section of traffic (pictured here). We've heard that Dylan Thomas is depicted but we can't identify him. Created in 1980. When Time Out compiled a list of London's best murals this came out number 1.

2010: the lower section of the mural is enhanced with extensive graffiti. We had heard that the mural was to be restored in September and now, November, the open space in front is undergoing works of some sort so perhaps the mural will be cleaned up. Fitzrovia News has some details.

This section lists the subjects commemorated on the memorial on this page:
Fitzrovia Mural

Poet. Born at 5 Cwmdonkin Drive, Swansea, which is now a themed holiday renta...

This section lists the subjects who helped to create/erect the memorial on this page:
Fitzrovia Mural