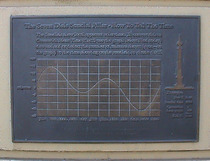 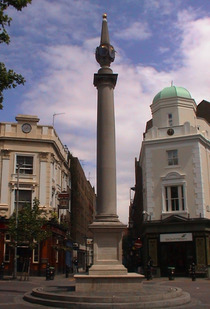 {on the west side of the plinth:}
Unveiled by Her Majesty Queen Beatrix of the Netherlands, 29 June 1989.

{On the east side of the plinth:}
This sundial was built in 1694 by Edward Pierce and Thomas Neale, removed from Seven Dials in 1773 and rebuilt 1989.

{On the plaques around the edge of this junction:}
The Seven Dials Sundial Pillar - How to tell the Time
The Sundials show local apparent solar time. To convert this to Greenwich Mean Time (GMT) use the graph below. Find today's date and add or deduct the number of minutes shown (+ or - on the graph) to the time showing on the sundials, to obtain GMT.
{An example of this calculation is given to the right of the graph, under an outline of the pillar.
Below the graph:}
'Time - I have no notion of that artificial division in eternity'
Generously sponsored by Dave Stewart.

To many people's disappointment, the pillar itself is not the needle of the sundial. Above the pillar and below the spire there are some dials, each with their own needle. Guess how many dials - wrong - the junction was planned to have only 6 roads so there are 6 dials. Neale laid out the whole area and squeezed in an extra road at the last minute. Pierce built the Sundial Pillar. The original Pillar was moved in 1773 to Weybridge, where its remains can still be seen.

Queen Beatrix was chosen to unveil this monument as part of the celebrations of the Glorious Revolution when the Dutch William of Orange was invited to take our throne, in 1688. And the Pillar was erected during his joint reign with Queen Mary.

You can't miss the pillar at the centre of this busy little traffic intersection. There are (at least) 3 identical plaques placed around the junction which explain how to use the sundial.

We chanced upon a picture of the unveiling of this monument, in the book "Babylonian London, Nimrod, and the Secret War Against God".  The author has "embarked on a detailed analysis of the monuments of London" with a view to better understanding "how the world is run and who is really in control".   We've spent over 14 years on a similar activity and we are certainly no closer to understanding that, but we'll keep trying.

This section lists the subjects commemorated on the memorial on this page:
Seven Dials monument

This section lists the subjects who helped to create/erect the memorial on this page:
Seven Dials monument

She had a busy time on her visit to England in June 1989 to help us celebrate...

Entrepreneur, the organiser of England's first lottery. Known as 'The Great P...