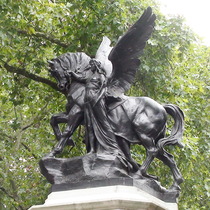 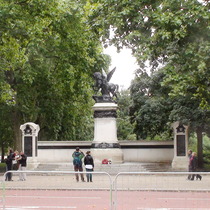 {On the curved back wall:}
Erected by the officers and men of the Royal Artillery in memory of their honoured dead. South Africa. 1899-1902

{Around the middle base of the plinth, in sculpted ornate cartouches, the RA's mottos which translate as 'Everywhere' and 'Where Right And Glory Lead':}
Ubique
Quo Fas Et Gloria Ducunt

Bronze statue depicts War being controlled by Peace. Unveiled by the Duke of Connaught.

The pillars at each end carry bronze panels, a total of 6, 2 of which carry relief depictions of the war. The other 4 carry lists of names totalling 1,078. We normally transcribe the lists of the dead on war memorials but, following a few massive lists, we have implemented a limit of 1,000. Luckily this memorial has an on-line roll of honour.

The shape of these piers reminds us of Soane's tomb.

This section lists the subjects commemorated on the memorial on this page:
Royal Artillery Boer War memorial

This section lists the subjects who helped to create/erect the memorial on this page:
Royal Artillery Boer War memorial

Sculptor. Born Paris but came to England early and made his home in London. ...

Above this plaque is a black stone carved with the RAAF badge. The plaque re...