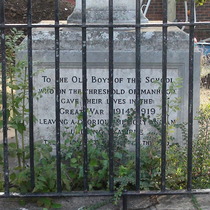 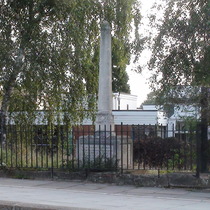 {On the front face of the plinth:}
To the Old Boys of this School who on the threshold of manhood gave their lives in the Great War 1914 - 1919 leaving a glorious memory and an undying example.
They played the game to the end.

{On the other two faces of the plinth which are visible from the road there is a list of 66 names, in alphabetical sequence, in 3 columns on each face. See Subjects commemorated for the list. We have seen the back face of the plinth and it is blank.}

The face on the right (south-facing) has been badly weather-beaten and then it seems the lettering has been renewed but only some of it, leaving 14 names totally illegible: 8 between Hughes and Mills and 6 between Noel and Scott. Odd, but there it is.

2014:  Via Facebook/Yahoo! Dickinsonthc provided some useful info on this memorial, for which we are very grateful:  Here Teddington Council School, for secondary aged pupils first opened on the current Stanley Primary School site in 1907. The WW1 memorial commemorates pupils and masters from the Teddington Council School and was erected in 1920. The quote 'They played the game to the end' is a reference to {but not a quote from} a poem by Sir Henry Newbolt. The memorial was partly refurbished around 2004 - the names that had not been totally eroded were re-engraved and the missing names that could be found in local archives were also re-engraved. The school holds a remembrance service around the memorial each year and children tend the graves in Teddington Cemetery of those commemorated by the memorial. During recent building work the memorial has retained the low railings on the road-side and has large gates to the rear which can be opened up to allow the school's memorial service to take place.

The text on the monument finishes "They played the game to the end". This exemplifies the attitude taken to war at the time; it was all a game. But the sheer scale of the slaughter in WW1 changed people's outlook.

2014: the monument appears on the War Memorials On-line website.

2016: we saw that an information board had been installed (in 2007 we think) beside the monument.  It includes the text of a 1917 letter from the Head Teacher of the Junior Department, Fanny Beanes, to the Council, suggesting a ‘Shrine for the Fallen’.  This includes: “We have lost many old boys (37 I believe) from this school, 1 class master; and 2 junior teachers who, after receiving their training here had found posts elsewhere, have also given their lives for their country.”  This board also provided the picture and information for Walter Brown, the class master who was lost.

This section lists the subjects commemorated on the memorial on this page:
Stanley School WW1 memorial

2012 and the school is a primary school only, and in our experience primary s...