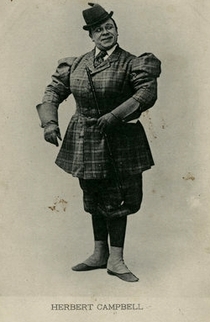 Music-hall artiste. Born Herbert Edward Story at 16 Hamilton Street, Kennington. He was famous for starring, for forty years, in the Theatre Royal, Drury Lane's Christmas pantomimes, predominantly as a dame and many times in partnership with Dan Leno. Renowned for his stentorian tones, they were the indirect cause of his death. As he alighted from his brougham carriage, his instructions to the coachman startled the horse, which reared and knocked him over. A bruised leg became ulcerous, causing septicaemia, and he died from a brain haemorrhage at 28 Quadrant Road, Islington.

This section lists the memorials where the subject on this page is commemorated:
Herbert Campbell

Actor-manager, owner of the Adelphi Theatre. Born in London as William Charl...

Sir Peter Reginald Frederick Hall CBE was a theatre and film director who was...