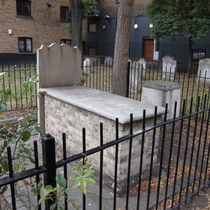 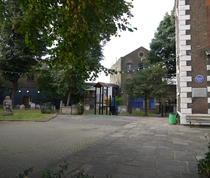 {Inscription on the top of the tomb:}
To the memory of Prince Lee Boo, a native of the Pelew or Palos Islands and son to Abbe {sic} Thulle, rurack or king of the island Coorooraa who departed this life on the 27 December 1784 aged 20 years. This stone is inscribed by the Honourable United East India Company as a testimony of esteem for the humane and kind treatment afforded by his father to the crew of their ship The Antelope, Capt Wilson, which was wrecked off that island on the night of the 9th August 1783.
Stop reader. Stop. Let nature claim a tear, a prince of mine, Lee Boo, lies buried here.

A plaque inside St Mary's church also commemorates the prince.

October 2014: We were contacted by someone saying "... the majority of your palauan gramar and spelling is way off. You misspelled our king (high chief) Ibedul's name. we are very offended by that.....". We wrote back explaining that it was not our translation and requesting that they provide the correct text. Once it arrives we will happily publish it.

2021: Dr Chrystopher Spicer kindly wrote to say "Your correspondent was right. The names are not correct, but that may have been due to either Victorian era phonetic spelling or worn lettering on the tomb. Abba Thulle, the ruler (ibedul) of Koror, the most populous island of the Palau Island group (now the Republic of Palau), allowed his second son, Prince Lee Boo, to travel back to England with the men of the East India ship Antelope to learn more about Europeans, after they had spent three months on the Island building a replacement ship after the wreck of the Antelope on Oroolong. However, the Prince died of smallpox at the end of 1784 before he could return. Prince Lee Boo was thus one of the first people from the Pacific Islands to visit England."

The Christopher Jones statue is on the left of the picture, and Prince Lee Boo's tomb in the centre (next to the rather incongruous children's climbing frame).

This section lists the subjects commemorated on the memorial on this page:
Prince Lee Boo's tomb

This section lists the subjects who helped to create/erect the memorial on this page:
Prince Lee Boo's tomb

This section lists the other memorials at the same location as the memorial on this page:
Prince Lee Boo's tomb

The dates given are the "start" dates of the two churches which have been ere...

The maze was funded by a bequest from the late Colette Fontaine and a generou...