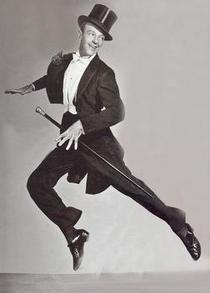 Dancer, singer, actor. Born and died America. Brother and sister, Frederick and Adele Austerlitz, started as children as vaudeville performers. Between 1917 and 1932 they appeared in musical shows on Broadway and in London as Fred and Adele Astaire. Adele retired to marry the second son of the Duke of Devonshire and Fred went on to a successful solo career, sometimes with Ginger Rogers. Films include Top Hat, 1935 and Swing Time, 1936.

The 1951 film Royal Wedding is set in London (but filmed in relentlessly sunny Hollywood) during the real 1947 royal wedding. The plot incorporates a number of points from Astaire's real life: his partnership with Adele; her marriage into the aristocracy, and even the difficulty of dancing on a ship in rough weather, but probably not the rotating room.

This section lists the memorials where the subject on this page is commemorated:
Fred Astaire

Theatre manager and film cameraman. Born in Roydon, Essex. Details of his lif...