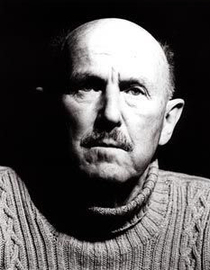 Born Michael Latham Powell at Howletts, Bekesbourne, near Canterbury, Kent. He left his job in banking to enter the film industry. As co-director to Alexander Korda on 'The Thief of Bagdad' he was introduced to Emeric Pressburger with whom he developed a successful partnership on films such as 'The Life and Death of Colonel Blimp' 1943 'Black Narcissus' 1947 and 'The Red Shoes' 1948. In his solo career, he directed 'Peeping Tom' 1960 which at the time was reviled for its supposed sadism, but has since come to be regarded as a classic of the horror genre. Died at his home, 1 Lees Cottage, Avening, Gloucestershire.

Martin Scorsese greatly admired Powell's work and in the 1980s initiated a revival of interest in his work. This relationship resulted in Powell meeting and marrying Thelma Schoonmaker, Scorsese's editor.

This section lists the memorials where the subject on this page is commemorated:
Michael Powell