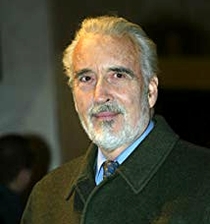 Actor. Born Christopher Frank Carandini Lee in Belgravia. After war service in various parts of Europe he took up acting, although at first he was told he was too tall. In films he is best remembered for partnering Peter Cushing in many of the Hammer films, including playing Count Dracula and Frankenstein's monster. In 1973 he appeared in 'The Wicker Man' which was one of his favourite films. In an attempt to break the type-casting of horror roles, he moved to the USA and appeared in several films including 'Airport '77'. His later work included roles in the immensely popular Star Wars and Lord of the Rings films. He also had a fine singing voice and made many recordings.

This section lists the memorials where the subject on this page is commemorated:
Sir Christopher Lee

Actor. Born Port Talbot, Wales. Spotted by Olivier in 1965 and invited to j...