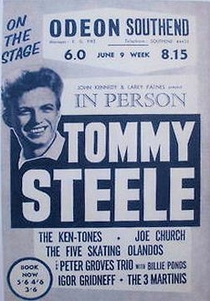 Musician and actor. Born Thomas William Hicks in Bermondsey. He was promoted as the British Elvis Presley and had his first chart success with 'Singin' the Blues'. Many hits followed and in time, he became a 'family entertainer'. His life story was filmed when he was only twenty, and he turned to acting, both on stage and in film, particularly in 'Half a Sixpence'. He was however not universally adored. There is a theatrical legend, that when he was appearing in the stage version of 'Singin' in the Rain', he so antagonised the backstage crew, that they wreaked revenge by regularly urinating into the water tanks that were to rain down on his head during the show’s title number.

We've read that he has a blue plaque at the London Palladium but it must be inside.

This section lists the memorials where the subject on this page is commemorated:
Tommy Steele