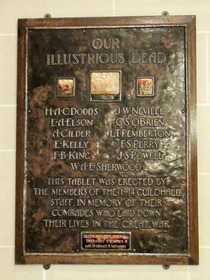 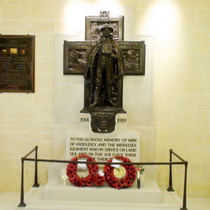 Our illustrious dead
{3 enamelled scenes}
{list of 11 names, in alphabetical sequence - see Subjects commemorated.}
This tablet was erected by staff, in memory of their comrades who laid down their lives in the Great War.
{In an enamelled square at the bottom of the plaque:}
Death has this sweetness that while it removes a life it makes a memory.

This is a classy plaque, very of its time. From Fanny Cornforth we learn that the text "death has...." is written by Henry Wilson and is from an 1898 obituary of Edward Burne-Jones in The Architectural Review, of which he was editor. We cannot find a date for this bronze memorial but, given its jewel-like qualities, we think Wilson may also have created it. Strangely the listing text for this building describes its architectural design as being "... influenced by Henry Wilson.... " but we can find no confirmation that Wilson was involved in the design of the building, nor this memorial.

These two memorials are beside each other in the entrance area.  We have another page for this building: Middlesex Guildhall - exterior which covers the splendid frieze on the outside.

This section lists the subjects commemorated on the memorial on this page:
Middlesex Guildhall war memorial

Middlesex Regiment and men of Middlesex

2nd.Lieutenant of the Yorks and Lancs. Regt. Buried in Croydon Cemetery.

This section lists the subjects who helped to create/erect the memorial on this page:
Middlesex Guildhall war memorial

This section lists the other memorials at the same location as the memorial on this page:
Middlesex Guildhall war memorial