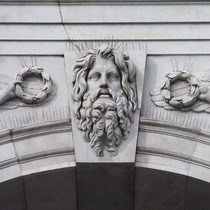 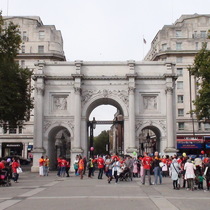 In summary:
45ft high, clad in white Carrara marble. Designed by Nash and erected, 1827-33, as a ceremonial entrance from the Mall to Buckingham Palace. When the Palace was extended the arch was moved in 1851 to its current position.

In more detail:
1826-9 George IV remodelled what was then known as the Queen's House, into Buckingham Palace, using John Nash for the designs. They decided to incorporate a celebration of the recent British victories in the Napoleonic Wars. While successful, Napoleon had had a habit of creating triumphal arches in his capital: the Arc de Triumph with just one arch, and the Arc de Triomphe du Carrousel with three (modelled after the triumphal arch of Constantine, erected in Rome in 312). So the copycat King and Nash created their own triumphal arch, also modelled on Constantine's arch.

Nash’s design included a lot of statuary and relief work especially at attic level, by Westmacott and Baily (Flaxman and Rossi are also named in some sources) but on the death of the King in 1830 this was all cut back. The statue of King George IV, intended to top the arch was put on a plinth in Trafalgar Square in 1843. Other unwanted sculptural work was used in Buckingham Palace and on the façade of the new National Gallery, and one piece went into hiding for over 160 years. Wikipedia has an image of the original design for the arch and Speel specifies who did what.

The first occupant of the remodelled Buckingham Palace was the new Queen Victoria in 1837 but she quickly filled it and needed to extend. The east wing was added (this is what we now see as the front of the palace) but it meant the Marble Arch had to go, since it stood about where the much-photographed balcony now is. The Arch was relocated here, Cumberland Gate, the north-east corner of Hyde Park, to become a ceremonial entrance into the Park (1895 map shows its location). The rebuilding work, completed in 1851, left the arch with three small rooms which were used as a police station until at least 1968. Since then the Arch has not moved, but the roads around have been widened, made one-way, and hellish.

Setting the record straight: 1) The arch was not moved because the royal carriage could not fit through it - in 1953 Queen Elizabeth’s coronation coach got through without scratching the paintwork. 2) The plaque at the Nash summer house in St James's Square (not yet published) says that Nash designed the “relocation of Marble Arch” but this wasn’t contemplated until 1847, by which time he’d been dead for 12 years. 3) Marble Arch is the one at the north end of Park Lane, Wellington Arch is at the south (some people get confused). 4) Speakers Corner is often said to be at Marble Arch; this may have been true before the roads took over, now it's actually in the nearest section of Hyde Park.

This section lists the subjects commemorated on the memorial on this page:
Marble Arch

Following the French Revolution France, under Napoleon, fought with most of E...

This section lists the subjects who helped to create/erect the memorial on this page:
Marble Arch

The grill is above a brick-walled tunnel which carries a mass of cables. The...