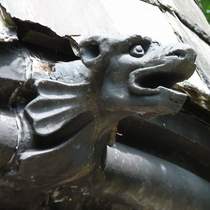 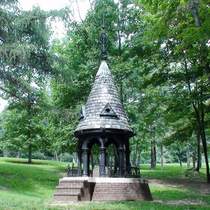 {On a modern information board:}
Kentuck Knob
Finial from One, Poultry, London EC4, 1870
This finial was the uppermost element of the building known as Number One, Poultry, in the heart of the City of London. The building was constructed in 1870 to a design by the Victorian architect John Belcher Jr., in the Venetian-Gothic style. A replacement building by Professor Ludwig Mies van der Rohe was proposed in 1967, but after much controversy, the project, known as Mansion House Square, was finally defeated in 1982. In 1986 an alternative project, also known as Number 1 Poultry, was designed by the British architect Sir James Stirling. The foundation stone of this building took place in 1998.
The finial fragment, popularly nicknamed 'the Witch's Hat', was carefully dismantled, numbered, and shipped to the United States, where it was reassembled, first in the grounds of the Farnsworth House, by Professor Ludwig Mies van der Rohe in Plano, Illinois; and now, in 2003, at Kentuck Knob.

Palumbo owned the Farnsworth House, near Chicago, 1972 - 2003. It was presumably when he vacated that building that the finial was relocated here. We find it odd that he rescues modernist buildings in the States and uses their grounds to display a trophy from the much-loved Victorian building he demolished in London.

USA. You never know when or where you might come across a London memorial. We did not expect to find part of the Mappin and Webb building when visiting a Frank Lloyd Wright house in Pennsylvania, USA. Lord Palumbo owns the house and kindly makes it available for the public to view. The sculpture park in the extensive grounds holds the finial which used to top the Mappin and Webb building in Poultry, London, which Palumbo was responsible for having demolished.

This section lists the subjects commemorated on the memorial on this page:
Mappin and Webb building at Kentuck Knob

Father of James Baldwin Wheeler. "Glover" - we think this means he was a mem...

This section lists the subjects who helped to create/erect the memorial on this page:
Mappin and Webb building at Kentuck Knob

This 'Greathead' type tunnelling shield ws left at this point 18 metres below...