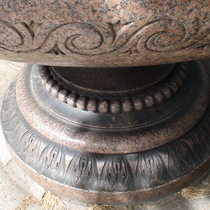 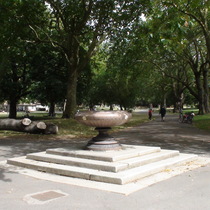 On a nearby information board: Slade Fountain – This drinking fountain was installed in 1861 at the request – and expense – of local resident Felix Slade, founder of the Slade School of Art. Based on a design by an Italian artist shown at the 1851 Great Exhibition, and adapted by Charles Driver FRIBA, it is made of Aberdeen red granite with medallions of coloured marble that show Slade’s monogram, coat of arms and the date. The vase it once had on top of it featured bas reliefs of biblical figures Jacob and Rebecca, and Hagar and Ishmael.

British History On-line gives: “At the suggestion of the Master of Bolton Street school, a gymnasium was erected in the Park in 1861 opposite the church of St. Agnes. In 1862 Felix Slade presented a drinking fountain; the steps and the bowl were of granite and were surmounted by a bronze vase upon which Jacob, Rebecca, Hagar and Ishmael were represented in low relief. The fountain was designed by Charles H. Driver; the bronze work was executed by Messrs. Elkington and the mason’s work by Thomas Earp. The bronze vase has now been removed, and the bowl is used as a jardinière."

And from Historic England: "Mounted on four steps, only the polished red granite base survives; the upper part, cast in bronze, from which the water flowed out of four lotus flowers, has gone."

Somewhere there must be an image of this fountain before it got so reduced, but we can't find it. But Cal Deetho found two: Lambeth Landmarks, ref. 3554 and Media Storehouse. Thanks Cal.

St Agnes is the church east of the Park, immediately south of Kennington Park Gardens. This 1893-6 map shows the church, the gymnasium and a "Drinking Fountain" on a square, stepped base, exactly where it is now.

Sometimes known as the Slade Memorial Fountain but it's not clear that it's actually commemorating anything so perhaps it has no place on this website. We just like it.

This section lists the subjects commemorated on the memorial on this page:
Slade fountain

This section lists the subjects who helped to create/erect the memorial on this page:
Slade fountain

Architect, known for his pioneering use of ornamental iron work.  His work in...