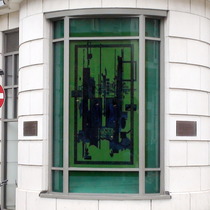 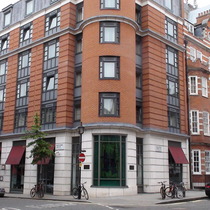 {Plaque to the left of the window:}
Light in the Darkness 2000 by Julian Stocks
This stained glass window celebrates the River Tyburn that flows beneath Marylebone Lane.  It was commissioned by Jurys Clifton Ford Hotel in consultation with The Howard de Walden Estate and Westminster City Council and takes the form of a lantern window which, when illuminated, will act as a beacon.

During the 18th century the River Tyburn was an open stream that ran from the hills of Hampstead Heath down to the River Thames. Marylebone Lane followed the banks of the river, the course of which has since been culverted, but still maintains a presence most noticeable in it’s {sic} serpentine form.

The design makes reference to other aspects of the site’s history and includes a chronology of maps and drawings as well as key dates relating to The Howard de Walden Estate.  The historical context belies the contemporary method of production which employs the latest techniques of enamelling, etching and computer aided design.  This honours the past but also holds up a mirror to the many and varied aspects of urban society.

{Plaque to the right of the window:}
The Millennium addition to Jurys Clifton Ford Hotel was opened by HRH Prince Michael of Kent KCVO on Tuesday 24th October 2000.

Occupied by a restaurant, One08, who, disappointingly, don't make a feature of the stained glass window on their website.  We'd hoped to find a photo taken from the inside, which normally is the best way to view stained glass.  On our picture we’ve turned the brightness up high since that shows the design better.  We still can’t see a "serpentine river" in it but maybe that’s just us.

The artist's website talks about a Tyburn Project for which the address is 110 Wigmore Street: "This project is a celebration of the River Tyburn. It is one of several artworks that mark the path of the Tyburn as it flows from the springs on Hampstead Heath to the Thames at Westminster."  The photos there can be identified as the windows to the west end of 110 Wigmore Street (Zizzis) although on Streetview it's not possible to see the coloured glass or whether there is also a plaque there.  We have made a note to visit and will keep our eye out for any others of the "several artworks".

This section lists the subjects commemorated on the memorial on this page:
River Tyburn - W1

This section lists the subjects who helped to create/erect the memorial on this page:
River Tyburn - W1