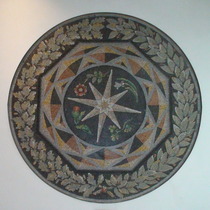 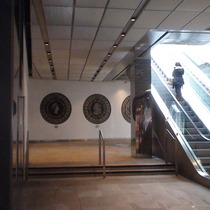 The star is surrounded by an English rose, a Scots thistle, an Irish clover sprig and a Welsh daffodil.

This mosaic, the right most, does not show a monarch and even we can't really call it a memorial but we include it here for completeness, and also to serve as the memorial for the original building from which all the mosaics were salvaged, New Change Buildings.

This section lists the subjects commemorated on the memorial on this page:
Mosaics - emblem

This section lists the subjects who helped to create/erect the memorial on this page:
Mosaics - emblem

This section lists the other memorials at the same location as the memorial on this page:
Mosaics - emblem