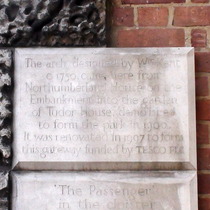 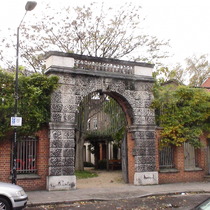 The arch designed by Wm. Kent c.1750, came here from Northumberland House on the Embankment into the garden of Tudor House, demolished to form the park in 1900. It was renovated in 1997 to form this gateway funded by Tesco plc.

From the excellent London Gardens Online we understand that: This arch originally formed a riverside entrance to Northumberland House. When this was demolished in 1874 George Gammon Rutty purchased the arch as an ornament for his garden here, at what was then Tudor House. The House grounds of 1.5 acres fronted onto St Leonards Street and stretched as far as Devons Road. The garden was between the Congregational Church (this building still exists, on Bruce Road) and the House which we think must have been about where the Community Centre is now. On Rutty’s death his trustees sold Tudor House and its grounds, in 1898, to the LCC who demolished the house and converted the grounds into a public garden which was opened as Bromley Recreation Ground in April 1900. At this point we believe the arch was in the north wall of the recreation ground. In 1998 it was re-erected in its current position forming the entrance to the Healthy Living Centre.

Spitalfields Life adds: "At this point {when the LCC acquired the arch}, there were two statues situated at the foot of each of the pillars of the arch but they went missing in the nineteen-forties."

The 3 plaques are all on the inside left of this arch, top down: Jowell, Kent, Ennals.

This section lists the subjects commemorated on the memorial on this page:
Kent arch

This section lists the other memorials at the same location as the memorial on this page:
Kent arch

To commemorate the Royal School of Naval Architecture established on this sit...