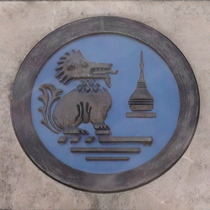 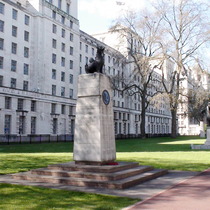 {On the front of the plinth below the badge:}
The Chindit badge portraying a Chinthe, a mythical beast, guardian of Burmese temples from which was derived the name Chindits, their motto being: The boldest measures are the safest.

In memory of all who fought on the first and second expeditions into North Burma 1943 and 1944 with the Chindit Special Forces, formed, trained and commanded by Major General Orde Charles Wingate, DSO.

His Majesty King George VI graciously awarded the Victoria Cross to: {list of 4 names and their regiments, in order of seniority.  See Commemorated subjects for the names.}

{On the left side of the plinth:}

{The back of the plinth is occupied by the Wingate memorial - see Also at this site.}

Unless we missed it, Cairns' name is not included in the Green Park Memorial Gate's list of VCs, while the other 3 Chindit VC names are.

This section lists the subjects commemorated on the memorial on this page:
Chindits

This section lists the other memorials at the same location as the memorial on this page:
Chindits

The local listing (which we can no longer access) for this memorial contains:...

The statue represents a soldier. To the left, in the cream marble, is a carve...