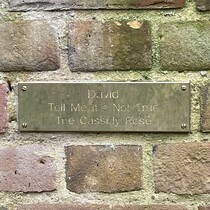 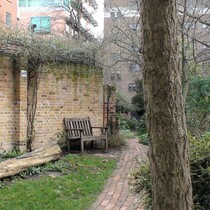 David. Tell Me It's Not True. The Cassidy Rose

"Tell Me It's Not True" is a song sung at the end of "Blood Brothers", a musical theatre production which had a 24-year run in the West End. Created in 1981 by Willy Russell. It was at the nearby Phoenix Theatre for 21 years and its final performance was there in 2012. David Cassidy played Mickey in the production, on Broadway and at the Phoenix, 1995-6. The Cassidy Rose is a Facebook page for David Cassidy fans.

This 'wishing wall' is best found by entering the garden from St Giles Passage. Follow the path to the right and you will find the wall on your right.

Phoenix Gardens was created by local residents on a car park, a former bomb site and opened in 1984. It is still maintained by volunteers.

This section lists the subjects commemorated on the memorial on this page:
David Cassidy - Phoenix Garden