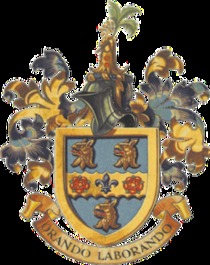 Probably born in or near Rugby, 1515-16. In 1534 he went to London as an apprentice to a grocer. 7 years later he was a grocer and in 1554 he was elected to the Worshipful Company of Grocers. He was very successful and grocered (if that's not a word, it should be) to the future Queen Elizabeth I. On her accession to the throne she granted him a coat of arms.

He bought property in and near Rugby and a 24 acre field in the Holborn area, now the northern end of Lamb's Conduit Street and Great Ormond Street. Though married he is thought not to have had any children. In his will he founded almshouses and a school, Rugby School, endowed with one third of the field in Holborn. In 1878 the Lawrence Sheriff Grammar School was split off as a separate school, both schools being in Rugby.

The Holborn land, the Rugby Estate, is still owned by Rugby School, and income is used to fund scholarships and bursaries at the School and also to part-fund Lawrence Sheriff School.

A leaflet (2022: this page is no longer available) produced to accompany the celebrations of the 450th anniversary of the bequest is very informative about the Rugby Estate.

The crest shown here is Rugby School's which Wikipedia says is a version of that granted to Sheriff.

This section lists the memorials where the subject on this page is commemorated:
Lawrence Sheriff

Unveiled by A. N. Wilson, an historian educated at Rugby, as part of the 450t...

Possibly designed by Wren.  Built by Lord Hatton following the loss of St And...