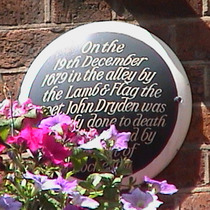 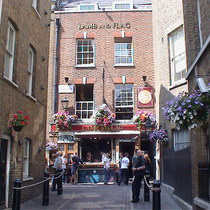 On the 19th December 1679 in the alley by the Lamb & Flag the poet John Dryden was nearly done to death by rogues hired by the Earl of Rochester.

This section lists the subjects commemorated on the memorial on this page:
John Dryden attacked

This section lists the other memorials at the same location as the memorial on this page:
John Dryden attacked

This plaque implicates De Keroualle in the attack on Dryden whereas it's more...