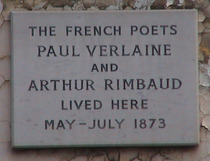 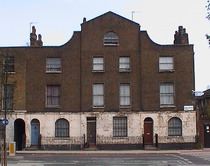 Chosen as our featured memorial in July 2004. The decadent relationship lived by this outrageous pair has left a trail of plaques across London and Brussels. Start your virtual journey in their footsteps right here.

Verlaine and Rimbaud had a homosexual relationship which was sado-masochistic and volatile. When they arrived at Charing Cross Station on 10 September 1872 Rimbaud was a handsome 18 year old; Verlaine, 28, "interesting-looking", married with a small child, claimed to be a political refugee but was really escaping middle class respectability. They were intoxicated with each other. They both used alcohol as a means of writing and absinthe, the "green fairy", was cheap and freely available in the French Quarter (Soho). They explored London together, walking everywhere, Verlaine often giving his impressions of London in his letters home. At one point Verlaine went to Belgium to attempt a reconciliation with his wife but failed and returned to Rimbaud in London.

In early November 1872, the pair attended a militant meeting among "ultra-communard" types in a room above the Hibernia Street Arms, a pub in Old Compton Street. Each November since 2002 (until at least 2009) this event has been celebrated by artist Michael Clark in his "site-specific sound sculpture", Drawing Breath, on the threshold of the Janus S&M sex-shop at 40 Old Compton Street. This art-work is inspired by Rimbaud's Vowel Sonnet and uses film director Nicholas Roeg's voice.

They first took lodgings at 34 Howland Street, now British Telecom Tower (no plaque) and in May 1873 moved to 8 Royal College Street. Here they had a major tiff. Sitting on an upstairs window sill, legs dangling out the window, Rimbaud saw Verlaine prancing home with their supper: a bottle of cooking oil and a herring, held between thumb and fore-finger. Rimbaud called out something rude about what a prat he looked. Verlaine said nothing but went into the house, put down the food, packed his bag and got a cab to the docks for a boat to Belgium. Rimbaud followed but could not persuade Verlaine to stay. Follow Verlaine to Brussels for the explosive end of their relationship on BrusselsRemembers .

In 2004 English Heritage, encouraged by Stephen Fry and David Starkey, agreed to put a Blue Plaque on this building but the owner, the Royal Veterinary College, refused permission since it would draw attention to its dilapidated state. At the time of writing, July 2008, the building has a new owner who is keen to see it used as some sort of cultural centre, and a charity, Poet in the City, is now actively trying to arrange that.

2020: We read that the house is up for sale, and still not being used as a cultural centre.

This section lists the subjects commemorated on the memorial on this page:
Verlaine and Rimbaud