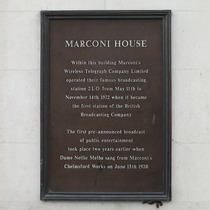 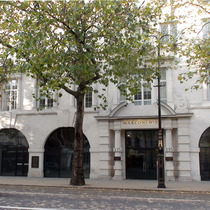 Within this building Marconi's Wireless Telegraph Company Limited operated their famous broadcasting station 2.L.O. from May 11th to November 14th 1922 when it became the first station of the British Broadcasting Company.

Marconi House was built in 1904 as the Gaiety Restaurant, linked with the Gaiety Theatre which was in the building to the west.   The Marconi Company moved into a suite of offices here in 1912, and it became their administration centre. In the 1950's the company, including this building, was acquired by English Electric. Prior to 2005 it was the Marconi Wing of Citibank House (which was on the site previously occupied by the theatre).  These two were rebuilt at the same time (during the recession so it took until 2012).  The theatre site became the ME Hotel.  The frontage of Marconi House was retained and the building seems now to be apartments.   Arthur Lloyd has some very interesting photographs, including one of the original plaque which referred to the room from which station 2LO broadcast.  The wording on the new plaque does not mention the room because, of course, that room no longer exists, having been demolished, by the people who replaced the plaque.  Mmm.

This section lists the subjects commemorated on the memorial on this page:
Marconi - WC2

Born Bologna. Arrived in London, with his mother, in 1896 to patent his metho...

Here lived Charles Kitterbell as related by Charles Dickens in sketches by Bo...

Plaque unveiled by Wendy Richard, David Croft and Ron Lynch (his partner). It...