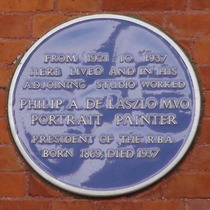 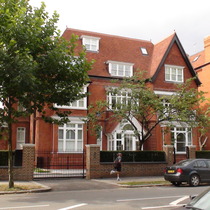 Erection date is approximate. Laszlo lived here with his wife and five sons, and died here. In his garden studio here he painted the young Princess Elizabeth (Queen to be), and her parents King George VI and Queen Elizabeth.

Plaques like this make one aware of the skill required to create a good plaque.

During de Lazslo's residence many celebrities came here for their portrait sittings. Following the de Laszlos the Sisters of Mercy of the Holy Cross took over the house, and then the two next door as well, numbers 5 and 7, creating a girls' school which operated until 1985. The house then became a hotel.

In 2009 this house, built in 1886, and the two to the north were demolished, leaving only some facades in place.  2013 - we found this sales website: "De Laszlo House provides just 18 magnificent two, three and four bedroom residences" etc, etc.

This section lists the subjects commemorated on the memorial on this page:
Philip de Laszlo

Painter. Born Budapest.  In 1907 moved to London and stayed, though he often ...

This stone was laid exactly 100 years to the day from his first act of bravery.

In commemoration of those who lost their lives as the result of enemy bombing...