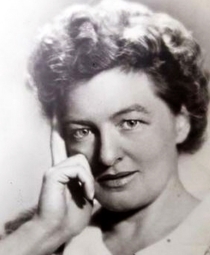 Author. Born Helen Lyndon Goff in Maryborough, Queensland. She emigrated to England at the age of 25 and adopted the name Pamela Lyndon Travers whilst writing the Mary Poppins novels for which she is best known, the first being published in 1934. There were eight in the series.

During WW2 she worked for the British Ministry of Information and travelled to America. Whilst there, she was contacted by Walt Disney with a view to selling him the rights to filming the Poppins novels. It was many years though before she finally agreed, and even then she disliked the film.

The story is told in the film 'Saving Mr. Banks' in which she is portrayed by Emma Thompson. She never married but lived for over a decade with Madge Burnand in a relationship that was described as 'intense'. Aged 40 she adopted an Irish baby boy, who became known as Camillus Travers. She died in London.

This section lists the memorials where the subject on this page is commemorated:
P. L. Travers