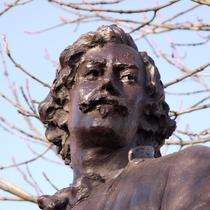 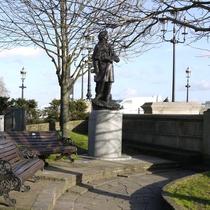 After Whistler's death, the Chelsea Arts Club proposed that Auguste Rodin should create a memorial to him. The project foundered when a member of the club said 'Why should this club pay a Frenchman for a statue of a Yankee in London?' The current statue was due to be completed to coincide with the centenary of Whistler's death, but was delayed several times, particularly by Transport for London who set costly conditions on the use of their site (known as Whistler's Reach). The statue was unveiled by Viscount Chelsea.

This section lists the subjects commemorated on the memorial on this page:
James McNeill Whistler statue

This section lists the subjects who helped to create/erect the memorial on this page:
James McNeill Whistler statue

Son of Richard and younger brother of the better known David and Jonathan, wh...

{Cut into the red marble immediately below the statue:}Beaconsfield {On the ...

{Carved on the front of the stone plinth:}Samuel Bourne Bevington VD, JP, 183...