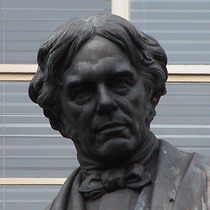 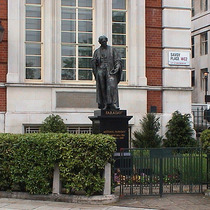 {A small plaque on the plinth informs:}
Bronze copy of marble original by J. H. Foley 1874 at the Royal Institution Their kind consent is acknowledged.

In his right hand he holds an induction coil. The marble original of this statue was made in 1874 and is held by the Royal Institute. This copy was made in 1988.

This section lists the subjects commemorated on the memorial on this page:
Michael Faraday statue

This section lists the subjects who helped to create/erect the memorial on this page:
Michael Faraday statue

This section lists the other memorials at the same location as the memorial on this page:
Michael Faraday statue

Made for the portico of St Mary-le-Strand but it was never erected there. It ...