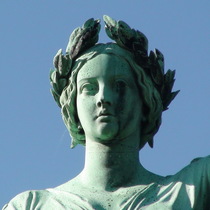 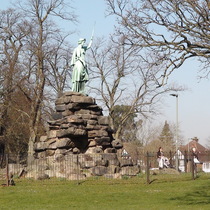 {Inscribed on the largest stone facing to the front:}
King Edward VII
Erected by Sydney Simmons JP, the donor of this park which was opened to the public on May 7th 1910 the day following His Majesty’s lamented death.

{On a plaque attached to the granite pile:}
In memory of the Peace Maker King Edward VII.

{On another plaque, lower down:}
Erected by Sydney Simmonds J.P., the donor of this park which opened to the public May 7th 1910, the day following His Majesty’s lamented death.

{Impressed into the base of the statue (we have not seen this text ourselves:}
J. Durham, Sculpt. London 1862
cast by Elkington & Co.

An information panel was erected in front of the statue by the Mayor of Barnet on 18 June 2016. It tells the story of the Park and the statue's arrival here well, but says little about the previous history of the statue, because at the time it was not known. Here is the relevant text of that panel:

Statue of Peace by Joseph Durham

Commemoration: You are standing in front of a statue dedicated to King Edward VII, eldest son of Queen Victoria and Prince Albert. ... He died on 6 May 1910 ...

The Benefactor: Sydney Simmons ... . He was a prominent member of the local community and when Friern Barnet Urban District Council purchased the Friary Estate in 1909 for £7796 from Eliza Richardson, Sydney Simmons reimbursed them £7500 (the purchase price excluding the legal fees) on the condition that it was used as a public park for all time. Middlesex County Council gave a grant of £1875 to cover the cost of converting the grounds into a park.

The Sculptor: The Statue was the work of the well-known Victorian sculptor Joseph Durham (1814 – 1877), ... This statue of Peace had been cast in 1862 but its whereabouts between casting and when it was purchased by Sydney Simmons for the park are unknown.

The Park: Friary Park was to have been officially opened by the Lord Mayor of London on Saturday 7 May, 1910, however the death of King Edward VII the day before meant that the ceremony had to be postponed although the park was thrown open to those who desired it. The opening ceremony eventually took place on 21 July 1910.
The statue is 3.3 metres (11 feet) high, is made of bronze and is mounted on 200 tonnes of Devon granite. The statue was erected in the park in March 1911.

There are two stones on the statue marked with inscriptions. The upper, smaller one reads: “In memory of the Peace Maker King Edward VII”. The second reads: “Erected by Sydney Simmons JP, the donor of this park which opened to the public May 7th 1910, the day following His Majesty’s lamented death.”

This statue, originally titled 'Queen' represents Queen Victoria and was approved by Prince Albert in October 1861. It was intended as the central part of a memorial in South Kensington to the 1851 Great Exhibition, but Prince Albert died at the end of 1861 and Queen Victoria had his statue placed on that site instead. Another use had to be found for 'Queen'.

Two versions of 'Queen' were displayed at the 1862 International Exhibition (held, May-November, on a site now occupied by the Natural History Museum): one, in bronzed plaster, was at the main entrance; the other, cast in bronze by Elkington using the electrotype method, was in the Royal Horticultural Gardens behind the exhibition building, near what is now the middle of Imperial College Road. We think the plaster one may only ever have been temporary and, being less robust, probably is truly lost.

The exhibition's memorial committee wrote to the Prince of Wales (later Edward VII) in January 1862 making it clear that the bronze statue, currently "being produced in bronze", was his (presumably inherited from his recently deceased father, Prince Albert). But at the close of the International Exhibition in November the Prince did not pitch up to collect the statue and it stayed in place for some years. Queen Victoria saw it there in 1864 and evidence suggests it was still there in 1881. It had to be gone by 1887 when the Imperial Institute was built on the site. But then ... the statue disappears from sight (as far as the records show) until 1911.

Sydney Simmonds gave Friary Park to the people of Frien Barnet and it opened to the public 7 May 1910 with rather muted celebrations since King Edward VII had died the day before. On 4 February 1911 a local paper reported on the arrival of this statue in the Park, a few days previously, named 'Peace' and donated by Simmonds, as a memorial to the late king, who was known as the Peacemaker. Despite her title she arrived brandishing a spear, in the hand which, back in her South Ken days, held a sceptre of state.

All our information comes from a terrific article in 3rd Dimension, or this link. That describes the investigation that discovered this story.

But a puzzle still remains: sometime during 1881-7 the statue was removed from its position in South Ken and kept somewhere only to reappear in 1911 in the possession of Simmonds. For a period of 25 or 30 years the statue's whereabouts are unknown and during that time it seems to have lost its identity, for surely, if Simmonds had known it was a portrait of Queen Victoria, he would have mentioned it? Was the sceptre of state removed deliberately to dissociate the statue from the monarchy?

March 2022: We understand that the statue has been removed for restoration, confirmed by Nick McKie of the Friern Barnet & District Local History Society.

This section lists the subjects commemorated on the memorial on this page:
Queen Victoria as Peace

This section lists the subjects who helped to create/erect the memorial on this page:
Queen Victoria as Peace

Unveiled by the Queen. Modelled by Jackson on the 1929 statue by Goulden in t...