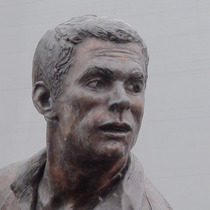 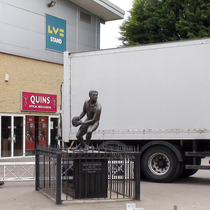 {On the back of the plinth:}
This statue by Nathan David F.R.B.S. Was funded by generous and spontaneous donations from supporters, friends and the rugby community to provide a permanent memorial to a charismatic player and personality tragically lost on 14th February 2003, just after his 21st birthday.

This section lists the subjects commemorated on the memorial on this page:
Nick Duncombe

This section lists the subjects who helped to create/erect the memorial on this page:
Nick Duncombe

The marble original is in Richmond, Virginia, USA. This bronze copy was prese...