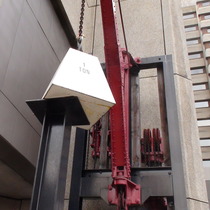 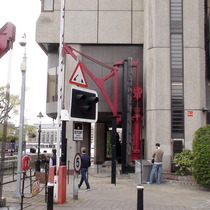 {The man on the right in our picture is reading the steel information panel:}

Hydraulic power
History
With the advent of the industrial revolution, the exports and imports of Victorian Britain caused the rapid early nineteenth century growth of the London docklands. Muscle and then steam provided the power to do everything from opening the lock gates to loading and unloading the vast warehouses flanking both banks of the Thames. However, fire was such a great risk that the insurance companies insisted on an alternative to steam.  This problem was solved largely by the hydraulic inventions of Lord Armstrong of Newcastle, amongst which was the ‘jigger’ preserved here, which in this case was built by the Hydraulic Engineering Co. Ltd. of Chester in 1890.  Hydraulic power was the lifeblood of the docklands.

Mechanics
Widely distributed and easily controllable high-pressure water was fed into the large cylinder.  This pushed the piston up, forcing the sheaves apart such that 10cm (4”) of silent piston movement gave 80cm (32”) of chain movement over the wall crane to unload lighters or barges in the river below. For loading boats out of the warehouse, water was exhausted from the cylinder so that the weight of the piston and load descended by gravity. Two small jiggers control slew, the horizontal semi-rotation of the crane for reaching different cargo positions and swinging the loads into the warehouse doors on each floor served by the same crane.  The jigger and crane could be controlled from any floor via a reach rod running up through the building.

The refurbishment of the jigger is part of a series of improvement projects by Taylor Woodrow Property Co. Ltd., owners of St Katharine Docks, with contributory funding from the Government Office for London Single Regeneration Budget Challenge Fund through an award by the Pool of London Partnership.

It can be seen going through its cycle by pressing the button once.  {There is a big red button.}

{All this is written either side of an incised line drawing of the jigger.  The St Katharine Docks logo is at the top.}

2014: We've corrected the British Engineerium Trust web address on the panel to be the correct one. The red button actually causes nothing to happen. And is that really a 1 ton weight resting askew on the pillar, very close to the footway?

This section lists the subjects commemorated on the memorial on this page:
Hydraulic power

This section lists the subjects who helped to create/erect the memorial on this page:
Hydraulic power