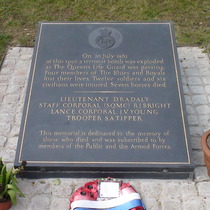 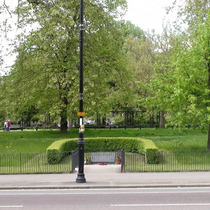 {On 20 July 1982 at this spot, a terrorist bomb was exploded as The Queen's Life Guard was passing. Four members of The Blues and Royals lost their lives. Twelve soldiers and six civilians were injured. Seven horses died.

This memorial is dedicated to the memory of those who died, and was subscribed to by members of the Public and the Armed Forces.

From the Western Front Association we learn that "Each time The Queen's Life Guard or other bodies of Household Cavalry pass the spot, 'they bring their swords down from the slope to the carry, coupled with "eyes left" or "eyes right" as a mark of respect. In addition Bands when passing the scene cease playing as they approach the spot, and only resume once they have passed.”

This section lists the subjects commemorated on the memorial on this page:
Hyde Park bomb

Andrew Behan has kindly carried out some research on this soldier: Squadron Q...