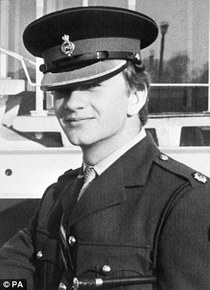 Andrew Behan has kindly carried out some research on this soldier:
Born Maidenhead, Berkshire, the son of Denis Joseph Daly and Valerie Margaret Daly, nee Stirling-Stuart. He married Nichola F Barcilon in June 1982 in Westminster and was killed 27 days later in the Hyde Park bomb attack, aged 23 years.

This section lists the memorials where the subject on this page is commemorated:
Lieutenant Denis Richard Anthony Daly