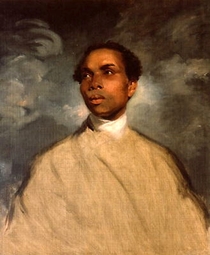 Born in Jamaica circa 1742/3 with the name 'Quashey' (a common name for male slaves). He was brought to England by his owner, Colonel Richard Bathhurst, and was sent to school in Yorkshire and then to London as Dr. Johnson's valet. He was given his freedom in Bathurst's will, and after working for an apothecary and a period as a 'landman' aboard various ships he became Johnson's servant. After Johnson's death, he moved to Lichfield and opened a small village school in nearby Burntwood. Died in the Staffordshire Royal Infirmary. The portrait is in Dr Johnson's house in Gough Square. It is usually thought of as being of Barber, although there is no definite confirmation of this.

This section lists the memorials where the subject on this page is commemorated:
Francis Barber