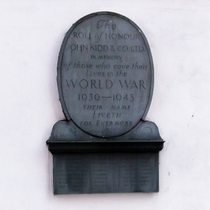 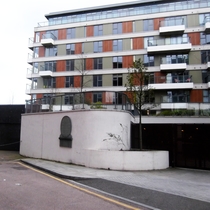 {On the oval plaque:}
The roll of honour John Kidd & Co Ltd.
In memory of those who gave their lives in the World War 1939 - 1945 their name liveth for evermore.

The inclusion of the caretaker and his wife on this memorial is intriguing. Andrew Behan has researched these names and confirms that although most of them are servicemen, killed while serving overseas, the Richards couple were killed here, 419 Old Ford Road, where he was the caretaker of John Kidd and Co Ltd's printing ink and varnish works.

The plaque was originally erected on the side of the company's building (see this Flickr page). It was relocated to this block of flats which replaced the demolished factory.

This section lists the subjects commemorated on the memorial on this page:
John Kidd and Co.

On this site stood St. Mary’s, Haggerston (Church of England). Designed by Jo...