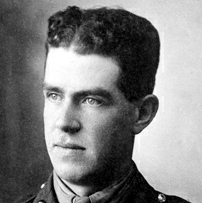 Soldier. Born Bernard Matthew Cassidy in Fulham. He was a second lieutenant in the 2nd Battalion, The Lancashire Fusiliers. At Arras, France, he was in command of the left company of his battalion, and had been given orders to hold on to the position at all costs. He rallied and encouraged his men under terrific bombardment, until they were eventually surrounded and he was killed. Bernard Cassidy Street in E16 is named for him.

This section lists the memorials where the subject on this page is commemorated:
Bernard Cassidy VC

The photo shows Ernie with his wife Lily on their wedding day before he went ...