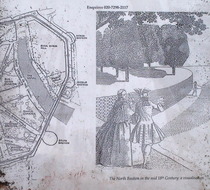 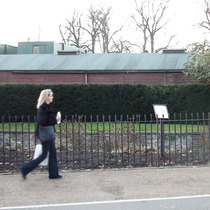 28th April 2004, Re. Restoring of the Middle Bastion.
As a minor project on this site, the Royal Parks Agency are currently exposing a section of the Middle Bastion along the east boundary of Kensington Gardens.
The middle bastion was originally constructed by Queen Caroline (married to George II) in 1730-1, when Charles Bridgeman was Royal gardener (1726-38) in Kensington Gardens. One of the first things Queen Caroline did was claim land from Hyde Park to greatly increase her garden's pleasure grounds. {The} Public were allowed in Hyde Park, therefore the construction of the bastion around the new boundary of Kensington Gardens ensured that they stayed out. The bastion also enabled those inside the gardens to be protected from external view, and permitted them also to be able to look out on the world. The middle bastion remained on this site until 1916, when it was filled in with soil and refuse, and the boundary was thereafter marked with a fence line.

We find the terminology used on the information board confusing; 'bastion' is used when 'ha-ha' would make more sense.  British History says "At each angle of this wall and fosse {the ha-ha} semicircular projections were formed, which were termed bastions."

When Londonist recently posted about Ha-Ha Road in Woolwich we commented that there was a surviving ha-ha in Richmond and then we find this ha-ha in the middle of Hyde Park.  You can go for years without seeing a ha-ha and then three come along at once.  Since then we have seen the Woolwich ha-ha and it is a fine example of the species.

See another board about the same structure further north.

This section lists the subjects commemorated on the memorial on this page:
Ha-ha in Hyde Park

This section lists the subjects who helped to create/erect the memorial on this page:
Ha-ha in Hyde Park

All the sources we have checked give 1834 as the year of origin.

The inscription reference to "war everywhere" was chosen in recognition of th...

{Beneath a representation of the Victoria Cross medal:}Private Edward Dwyer, ...