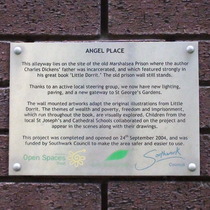 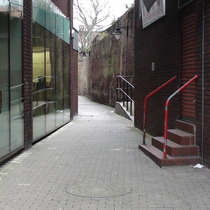 Angel Place
This alleyway lies on the site of the old Marshalsea Prison where the author Charles Dickens' father was incarcerated, and which featured strongly in his great book 'Little Dorrit.' The old prison wall still stands.
Thanks to an active local steering group, we now have new lighting, paving, and a new gateway to St George's Gardens. The wall mounted artworks adapt the original illustrations from Little Dorrit. The themes of wealth and poverty, freedom and imprisonment, which run throughout the book, are visually explored. Children from the local St Joseph's and Cathedral schools collaborated on the project and appear in the scenes along with their drawings. This project was completed and opened on 24th September 2004, and was funded by Southwark Council to make the area safer and easier to use.

The plaque refers to 'wall mounted artworks' but we did not see any on our visit in 2012, unless the plaques now in the ground used to be wall mounted.

We've put the pin for these 6 plaques at the entrance to the alleyway but they are actually laid into the ground, distributed along the alley all the way to Tennis Street. We've numbered them west to east. In our picture you can see the old wall, the steel plaque and the first of the stone plaques.

This section lists the subjects commemorated on the memorial on this page:
Marshalsea 2 - steel

This section lists the subjects who helped to create/erect the memorial on this page:
Marshalsea 2 - steel

Works with local people to develop parks and gardens so they can relax, kick ...

This section lists the other memorials at the same location as the memorial on this page:
Marshalsea 2 - steel

John Dickens, the father of Charles Dickens, was imprisoned here for debt fro...