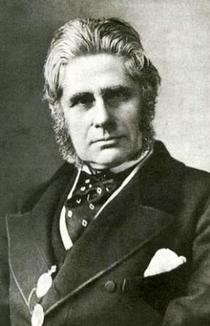 Army officer, anthropologist and archaeologist. Born as Augustus Henry Lane Fox at Hope Hall, Bramham, Yorkshire. He changed his name to Pitt-Rivers on inheriting the estates of his cousin Horace Pitt, sixth Baron Rivers. Educated at Sandhurst, he strove to improve army small arms training. His interests in archaeology and ethnicity led him to evolve a new approach to excavation. In 1882 he became the first inspector of ancient monuments. Founded the Pitt Rivers Museum in Oxford in 1884 by donating his collection to the university. Died at his house, Rushmore, Tollard Royal, Cranborne Chase, Wiltshire.

This section lists the memorials where the subject on this page is commemorated:
Augustus Pitt-Rivers

From Exploring East London: "During World War II the college was used by the ...