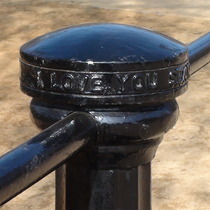 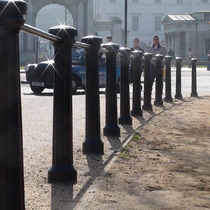 2013: You'd think one modern bollard is much like another, but not these 17;  The rim of each bollard cap carries an embossed name or phrase.  One of the bollards also has the date 1997 so presumably that is when the bollards were erected.  But why have they been inscribed with these names?  Some of the inscriptions are very odd.  We can only identify four names: Parker Bowles, Shiekh Khaled Jaber F. Al-Sabah, the Kuwait Embassy and the Chandris Foundation.  We think they probably funded something, but what?  We vaguely remember the road layout here being renewed some time back - could it be something so dull?

2014: Via Facebook Valentine Walsh solved our puzzle regarding these bollards:  “They were erected by subscription to replace the bollards removed to make arms in WW2. The idea began when those of us who rode in Hyde Park wanted them replaced to help separate the horses from the road. We raised the money and those who paid for each bollard had their name inscribed on them.  Finally when enough were paid for the Royal Parks put in the rest.  I used to ride with the Civil Service Riding Club out of Buckingham Palace you can see who I am by looking at my website ... you don't seem to have noticed mine, nor that of Nancy and Ian Stewart who had this as a wedding present as Nancy is an architectural historian and it seemed appropriate!  The Duke of Wellington's family (Wellesley) also have bollards.  I think most were erected in around 1988.”

We are very grateful to Valentine for explaining this, and we plan to re-visit the site and find the missing bollards.

March 2015: We went back prepared to photograph a few more inscribed bollards and quickly found over 50 - a few on the eastern section of South Carriage Drive but, most worryingly, along Rotten Row there is a line of bollards separating the horse-track from the cycle route.  This single-file army of bollards marches across the entire width of the park and we calculate there must be over 600.  Our next visit, with a bike, confirmed our worst fears - apart from a few near the centre, they are all inscribed.  And the bollards lining the path down to Albert Gate - they are also inscribed.  The donors are split about 50/50 between individuals and companies.  For all we know most of the bollards in Hyde Park could be inscribed.  We've decided that all the other memorials in London should take priority over these bollards.

This section lists the subjects commemorated on the memorial on this page:
Hyde Park bollards

This Crucifix was erected to mark the 125th Anniversary of the foundation of ...

To the memory of Sir Hans Sloane, Bart. President of the Royal Society and of...

This memorial is on the first floor facade of the building, to the left of th...