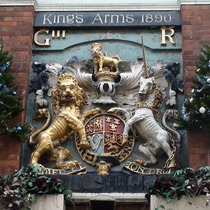 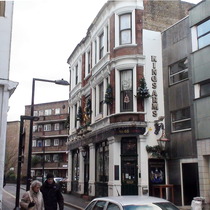 {around the shield, partly obscured by the animals' forelegs the motto of the Order of the Garter:}
Honi soit qui mal y pense

{at the bottom of the arms, on the ribbons, the monarch's motto:}
Dieu et mon droit

{and below in the black area, obscured by foliage:}
King Street

This is a finely detailed piece of sculpture and you don't have to look too close to see that the lion and the unicorn are what, in the language of heraldry is known as 'pizzled', a quite common sight on coats of arms until the Victorians arrived.

This coat of arms was added to Stonegate, at the southern end of Old London Bridge as part of some construction work in 1728.  To enable road widening all the buildings on the bridge were demolished by 1760 including Stonegate but this coat of arms was rescued and re-erected on this pub, of which the current building was erected in 1890.  Either the pub was already called the "King's Arms" and wanted the coat of arms because it was a ready-made sign, or, they were so delighted with the acquisition that they renamed the pub in celebration.

Our colleague Alan Patient, gave us this British History link which has a drawing of the pub in 1828, showing this coat of arms on a very different looking building that the Victorian one we see today.   It's possible that the early building just had a Victorian front tacked on the front to update it.   The street was named King Street in 1774, possibly partly as a result of this coat of arms being here.  In 1879 it was renamed Newcomen Street, after the charity which owned a lot of the area.

2016: Mick Cunningham contacted us with a link to a British Library page showing an 1880 photo of this coat of arms.

This section lists the subjects commemorated on the memorial on this page:
Old London Bridge - coat of arms

The memorial stone slab forms part of the floor of this crucifixion shrine. ...

The Great Wen suggests that these spoons first appeared in about 2000 and tha...