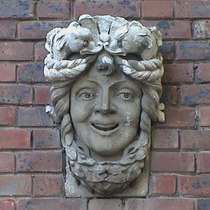 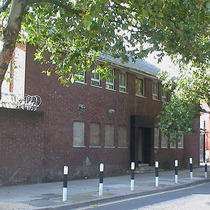 Normally one would expect four such figures to represent the four elements, or the four seasons but these puzzle us. What do they represent? What was the building they came from?

The front of this plain unattractive modern building is adorned with four heads which almost certainly have been reclaimed from a demolished building.

2016: Sometime over the last few years this building has been demolished and replaced with Urbanest St Pancras - a residential block. So these heads now appear on both our Lost page and our Puzzle page and we are wishing we had photographed all of them.

2020: David Wenk contacted us with a suggestion for the origin of these heads.  He suggested we ask the Midland Railway Study Centre because “according to old Ordnance Survey maps of the late 19th-century, the location of the now-replaced building on Camley Street was then the site of the Midland Railway's Good's Depot.”

We thanked David and wrote to the MRSC who wrote back with an extremely helpful, but disappointing reply.  To summarise Dave Harris’s reply: yes, the Midland Railway’s St. Pancras Goods Station occupied the large site between the canal and where the railway lines now are, with Camley Street now ploughing straight through it. The main office building (very small compared with the goods depot) was sited about where the building with the heads now is (was). And Dave shared both an aerial photo of the site showing this building, and the original architectural drawings. The drawings show a plain building that is not adorned in any significant way, certainly no whimsical heads.

As Dave writes “That sort of detail is something which may have been applied to passenger stations or a building which was otherwise on show to the public. However, given the parsimonious attitude of  most railway companies, including the Midland Railway, I don't believe it's a detail they would spend money on where it was unlikely to add to their prestige.” We are sure he’s right.

So, our thanks to the two Davids, but despite their efforts the mystery remains: where did these heads come from? And since c.2016 we have the added mystery: where have they gone?

We don't normally include graves but since this has been moved it is now eff...