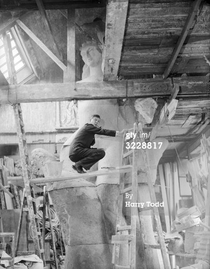 Born Aberdeen, Scotland. During the WW1 he was awarded the British and Victory medals, which he had himself designed. Died in hospital, Richmond, Surrey, following a mugging.
Other London work: the east fountain in Trafalgar Square; Sir John Alcock and Sir Arthur Brown at Heathrow; Charles Rolls and Henry Royce at Rolls Royce, 65 Buckingham Gate.
(this list from Bob Speel).  Also, from Ornamental Passions, the sculptures on the Scottish Widows building at 28-30 Cornhill.

R.A., sculptor. Born Belfast. Works include: "The reading girl" and the group...

A. Elfes and Sons