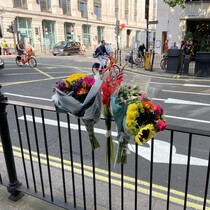 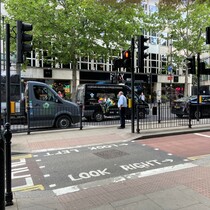 {On a letter attached to one of the bouquets:}
Dearest Marta

Struck down too early; you gave so much to the world & had so much left to achieve. You truly were an amazing & wonderful friend, colleague & doctor: compassionate, kind, generous, fun, knowledgeable & fill of joy & life.

You are & will be missed greatly, leaving a hole that cannot be filled.

Rest in peace knowing you are loved.

This is our third memorial at the junction (Francis Golding, Federica Baldassa) - all to cyclists killed by HGVs at this junction.  Road.cc report that at this junction "six other people have been killed while riding bikes since 2008, all in crashes in which large vehicles were involved – and all in an area where promised safety improvements have not yet been put in place."

This happened only yesterday (4 August 2021) so little is known. It was just before 9am so the woman on the bike may have been on her way to work. From the touching letter attached to one of the bouquets we know that she was a doctor named Marta.

TfL have a Vision Zero for London. Road.cc give the horrible death toll at this junction, "Holborn gyratory, acknowledged by TfL as “one of London’s most intimidating junctions with high numbers of collisions, inadequate footway space and poor cycling facilities.”" Improvements to make this junction safe have been promised for years and still people on bikes are dying.

This section lists the subjects commemorated on the memorial on this page:
Marta Krawiec

Dr Krawiec was killed by a left-turning HGV at the junction with Theobald’s R...

{The cornice above the arch reads:} St Bartholomew's Hospital, founded by Ray...