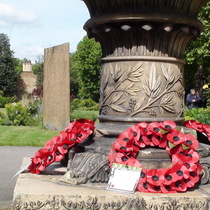 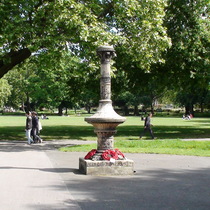 {The pillar is stamped:}
Doulton, Lambeth

On a nearby information board: "Tinworth Fountain - This was once a large ornamental fountain that stood in a panelled garden close to today’s park playground. The pillar was covered with a bas relief decoration and supported a fountain bowl, a taller, slimmer column and a sculpture, The Pilgrimage of Life. The creation of George Tinworth, the resident sculptor at Doulton’s Lambeth factory, the sculpture showed a man carrying a cross with a woman and child. The fountain was erected in 1872 and damaged irreparably during the Blitz: the sculpture survived until 1981."

John Sparkes designed the fountain which was donated by Sir Henry Doulton in 1869.

Brixton Buzz has photos of the fountain before it was so diminished. These show that the structure was not a drinking fountain. The pillar stood at the centre of an ornamental pond. The lower section supported a large basin from which rose the upper section. It looks as if water spilled over the edge of the basin into the pond below.

At the top of the pillar was a sculpture of a man and a woman, which illustrates the title 'Pilgrimage of Life'. the close-up photo shows that they are in medieval or Tudor dress; the woman holding a baby, the man carrying something like a single block of wood over his left shoulder. The photo from a distance shows that the man was originally carrying a complete cross, as if he were Jesus on the way to Golgotha. Brixton Buzz explains that the sculpture was removed following vandalism in 1981.

The Jarrett plaque is laid into the tarmac path between this pillar and the Kennington Park air-raid memorial.

This section lists the subjects who helped to create/erect the memorial on this page:
Tinworth pillar

This section lists the other memorials at the same location as the memorial on this page:
Tinworth pillar

{Below an image of a Victoria Cross medal:} Corporal George Jarratt, Royal Fu...