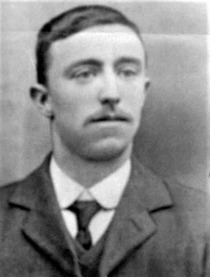 George Joseph Cressall  was born on 29 August 1880, the eldest of the sixteen children of Thomas Walter Cressall (1856-1927) and Clara Thurston Cressall née Durant (1861-1944). His birth was registered in the 4th quarter of 1880 in the Bethnal Green registration district and his father was a cooper. He was baptised on 10 October 1880 in St Anne's Church, Limehouse, and the baptismal register shows the family address as 146 Eastfield Street, Limehouse.

They initially lived at 15 Barnes Street, Limehouse, but moved in 1906 to 27 Tomlins Terrace, Limehouse, and the following year to 111 Rhodeswell Road, Stepney. The 1911 census shows him residing at 3 Lee Street, Limehouse with his wife and four sons. His occupation was given as a general labourer at an 'oil & color works'. By 1914 the family had moved to 82 Hind Street, Poplar. They finally settled at 15 Macquarie Way, Isle of Dogs in 1923.

Both he and his wife were Labour Party councillors in the Metropolitan Borough of Poplar and were committed to prison for contempt of court on 5 September 1921 along with 28 other councillors and were not released until 12 October 1921. He served as the Mayor of Poplar for the 1931-1932 year of office.

The 1939 England and Wales Register shows him living with his family at 15 Macquarie Way and lists his occupation as Secretary and Parliamentary Labour Party Agent. He was the Agent for George Lansbury, who was the Leader of the Labour Party from 1932 to 1935. In the 1949 New Year Honours List he was appointed as a Officer of the Most Excellent Order of the British Empire (OBE) for political and public services in Poplar.

He died, aged 70 years, on 20 February 1951 at St Andrew's Hospital, Devons Road, Bromley-by-Bow, London, E3. Probate records show that his home address remained as 15 Macquarie Way, Millwall and that when probate was granted to his widow on 18 May 1951 his effects totalled £571-18s-9d.

This section lists the memorials where the subject on this page is commemorated:
George Cressall